This New World – A web series even darker than Black Mirror

Foreword: who’s writing is a hugely enthusiastic fan of the series Black Mirror created by Charlie Brooker and now produced by Netflix. I genuinely think it’s the greatest and most modern TV show ever made and it’s stably at the top of my personal podium. So, when I say that the web series “This New World” is good as Black Mirror and even darker, you now know how much I loved it.
Let’s go step by step: “This New World” is a digital series created by two Italian guys, Marco Bazzi and Roberto Broggi, but it’s not an Italian series; it was produced and filmed in Barcelona with an international cast. The production behind this show is the band of Marco and Roberto, The Last Captains, which of course has also created the soundtrack of the series. It’s composed of six episodes of 12-16 minutes and you can find them all on the website www.thisnewworldseries.com.

The first episode starts with the definition of three different, but connected words: addiction, obsession, control. After these captions, we enter a room with a man kept prisoner, Dave. You might think that the focus of the show is to find out why Dave is prisoner, what he did and which are the chronological events that led him to that room, with a strange man who kindly talks to him offering a smartphone, two cigarettes and a lighter. But that’s not the point of this story, it’s just an excuse with which The Last Captains lead us into their philosophy about modern society. Soon this will be the only thing you will care about: knowing more about Dave’s vision of “this new world”. 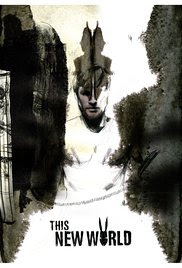 Black Mirror, I said. This is the easier comparison because both of these shows are about the evolution of the modern society, the creation of the digital world and its own destruction, and about how the modern technology has changed the human being. While Black Mirror is more dystopic and futuristic, This New World is more about how this kind of things have influenced the mind and the relationship between people in our days. As they beautifully say, we are more connected than ever, but at the same time more detached. It has also reminded me of the movie “Disconnect“, but once again: things here are darker, overwhelming in a kind of way. Here there’s the connection with the three words at the beginning: in our society we have lost control of the reality, starting to be addicted to the technology and then obsessed by it. We live in two separate worlds: the real one and this new digital world, where we can pretend to be whoever we want and we feel freer to act brakeless.
“This New World“, in each episode, forces us to think about some daily gestures and behaviours we make, in a more cynical and severe way: selfies, cyberbullying, app-dating, sexting are all things that seem harmless but can have serious consequences on the mind and the life of a person in a lot and tragic kind of ways. Really: “This New World“ is an amazing show because it’s able to let you think about something, to let you stop for a moment and consider this modern society in a different spotlight.
To do so, it combines a wonderful script to a terrific technical maturity: scenography, photography, costumes, music, editing, all the show is perfectly packed to let you sit down with the protagonist in that room and follow the stream of his point of view. And, in the end, you’re like “damn, he’s right”. In order not to be too Manichean, they also offer you another perspective, the possibility to re-consider this new way of living and to be in touch with others, in a more bright way. It’s up to you to decide if you want to take up your smartphone or leave “this new world” and get back to reality.
They have won the “Best Drama” at the last Bilbao Web Fest, where I had the chance to meet Marco and Roberto and to enter the show, starting being addicted to it. Hoping it doesn’t become an obsession and finally force me to lose control, for now, I can just say: watch the show, watch it again and, if you’d like to, think about it. You might find yourself saying “damn, they’re right.”
Here’s the trailer of the show, you already have the link for the official website and the last thing I can do is leave you with the official Facebook pages of the series (This New World) and of the band behind the show (The Last Captains).
Cristiano Bolla,
World Wide Webserie
@CristianoBolla