Friday, November 4th, 2016
At the end of October, took place the second edition of the UK Web Fest and we decided to tell you more about it with an article based on a interview with its founder, Monica Y. Dee. 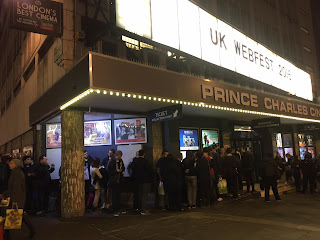 On October 29th, the city of London, one of the most amazing, beautiful and avant-gard places in the world, became the stage of the web series world; on that day took place the 2nd edition of UK Web Fest, British web festival founded by Monica Y. Dee (yes, after the Web Fest Berlin, DC Web Fest, Wendie Web Fest, Roma Web Fest and Bilbao Web Fest, another women is leading a web festival; web series festivals seem to be permeated by wonderful girl power and we think it’s amazing), «a former attorney turned writer/producer and a Masters in Film Production graduate». Monica arrived in London from Ethiopia when she was only 2 years old, she grew up with a deep passion for the audiovisual field. So, based in the British capital, she became a shorts and documentaries producer, in addition to the production of events for her corporate clients.
A few years ago, she felt that one web fest was just not enough in the UK, so she founded the UK Web Fest, that «was born to fill this gap and it had its premiere on the 25th October 2015». Monica and her small team organise and make this event possible. «We are always looking out for film enthusiasts to help out on the day».
«The aim of this festival», Monica told us, «is to shine light on the talented film makers so that their web series can be seen and heard». And it seemed that her aim has been sought. This edition received 124 web series (57 of which were officially selected) from all over the world. There were contents from Poland, Peru, Norway, Mexico, Korea, New Zealand, Switzerland, Spain, France, Germany, Australia, Canada, Argentina, USA & UK.
All these were judged (by Julie Kalceff, Andre Des Rochers, Darren Chadwick-Hussein Jett Garrison and Benjamin Johns) on “the narrative quality, on the production values and also on “the independent nature of the production“. 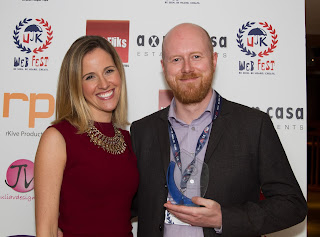 So, UK Web Fest gives the creators a stage on which they can show their talent, where they are evaluated for the capability of telling a story throw a web series content and, moreover, they are judged also for the production and the independent aspect of their creation. This soul of the UK Web Fest is really awesome because creators are awarded also for the production aspects of their web series.
Moreover «UK Web Fest is “unique”, because we are different; there is a £500 cash prize to encourage the winners to go out there and make another episode. We also give back 10% of submission fees to a school that might need extra film equipment in their film department». This is really interesting, because there are few festivals that actually give a cash prize! Monica feels that this money can be a big help to film makers, who need a boost of encouragement and the winners are well deserved of it.
Monica defined the UK Web Fest as «“personable”, because we are a boutique feel web fest and very family orientated. We consider all our officially selected web series like our own children, we want to see them grow and become successful». From this answer comes out the soul that sits this web fest slightly apart from others: helping as much as possible, with every effort, the creators, and encouraging them to go ahead and produce other web series. 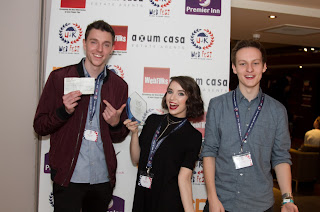 The UK Web Fest team is already thinking of the next edition and «we cannot wait to make the next experience bigger and better for the film makers and guests! We have no doubt that we will receive high end submissions and we look forward to it once again». Well, all we can do is sit tight and get ready for the next UK web fest, that will be on the 21st October 2017. «It may be in another city in the UK, but you can keep up to date with the new time and venues at www.ukwebfest.com which will soon be announced». So, stay tuned folks!

The video of the live streaming awards ceremony